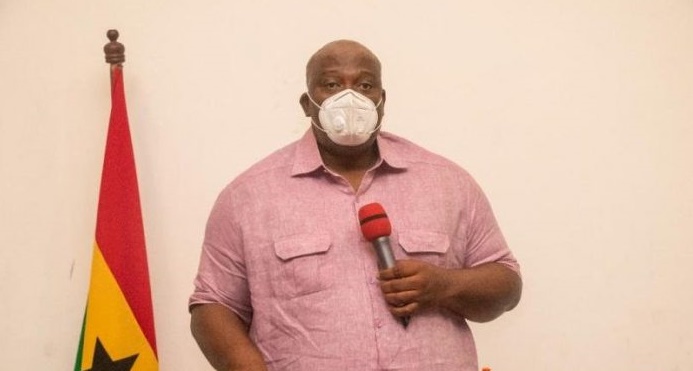 The Greater Accra Regional Minister, Henry Quartey, has cautioned traders who engage in business activities on pavements to refrain from such acts.

His advice comes after a video of a woman who was seen operating a mini eatery around the newly commissioned Pokuase interchange went viral.

Two persons, a father, and a daughter were arrested and cautioned by the police on Wednesday when they captured on video pounding fufu around the interchange.

Speaking at the maiden Greater Accra Presiding Members Conference, Henry Quartey called for a concerted effort in dealing with indiscipline in the city.

“The Let Accra Work again is to among other things address sanitation, weak enforcement of sanitation by-laws, and selling at unauthorized places including pedestrian spaces. In the last 72 hours, the famous fufu pounding at the Pokuase Interchange has taken over the media space. This cannot be happening. The President commissions the interchange which is one of the best in West Africa and the next thing was that we start pounding fufu there. That indiscipline must stop, and we need all and sundry to ensure that this is stopped. “

The Minister of Roads and Highways, Kwasi Amoako-Atta, a few days after the commissioning of the interchange, asked the Ga North Municipal Assembly to implement stringent rules to ensure that traders do not take over the spaces around the interchange.

Consultant for the four-tier Pokuase Interchange, Kwabena Bempong, has said a task force from the Ga North Municipal Assembly will be stationed around the project at night to prevent traders from doing business close to the edifice.

“Mr. Wilkinson is therefore using this medium to caution the public, and any person who plans or intends to engage or participate in such illegality around the bus stops, pavements, and footbridges of the Interchange, and also anyone who intends to paste posters and bills to immediately desist from such acts or face the full rigours of the law.”

“The public is also being reminded that the project is for everyone, and so he encourages all and sundry to be citizens and not spectators so that the interchange can serve its intended purpose.”

pazionglobalnews.com is a credible website that seeks to sensitize, conscientize, inform, educate and entertain. The owner of this website is an approachable, pragmatic and sharp-witted graduate who is always conscious of his environment, and he is dedicated to giving meaningful and well-informed information. He believes that service to humanity is our greatest task on earth. Contact:pazionglobalnews247@gmail.com
Previous ‘Apor Supreme’: Is the perennial problem of exam leaks beyond WAEC?
Next NPP has better records than the NDC – John Boadu