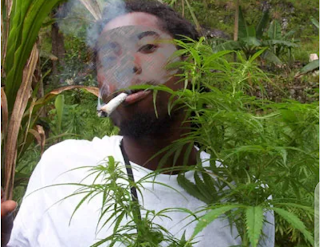 It was an unbelievable scene at Adansi Apagya in the Ashanti region when a BECE candidate who has been identified as Hassan Yussif left his paper to smoke marijuana in a nearby bush.

When the first paper started in the morning, the table used by Hassan was wet with sweat all over his paper according to the invigilator.

Before the start of the exams, he was reported to have taken in a bottle of popular Sobolo drink which was mixed with weed.

According to the invigilator, the only thing Hassan wrote on the social studies paper before he left the exams hall to smoke was his first name.

When he left the exams hall, he headed to the canteen and then proceeded to a nearby cocoa farm where he was caught smoking weed after he was chased.

He is reported to have informed his colleagues that he will be smoking his head off on the day of the start of their exams.

Watch The Video Below

pazionglobalnews.com is a credible website that seeks to sensitize, conscientize, inform, educate and entertain. The owner of this website is an approachable, pragmatic and sharp-witted graduate who is always conscious of his environment, and he is dedicated to giving meaningful and well-informed information. He believes that service to humanity is our greatest task on earth. Contact:pazionglobalnews247@gmail.com
Previous Millions of red crabs on Christmas Island move from the forest to the coastline (Photos)
Next LANDS MINISTER COMMENDS BONO HOUSE OF CHIEFS FOR TREE PLANTING INITIATIVE ALONG ALL WATER BODIES